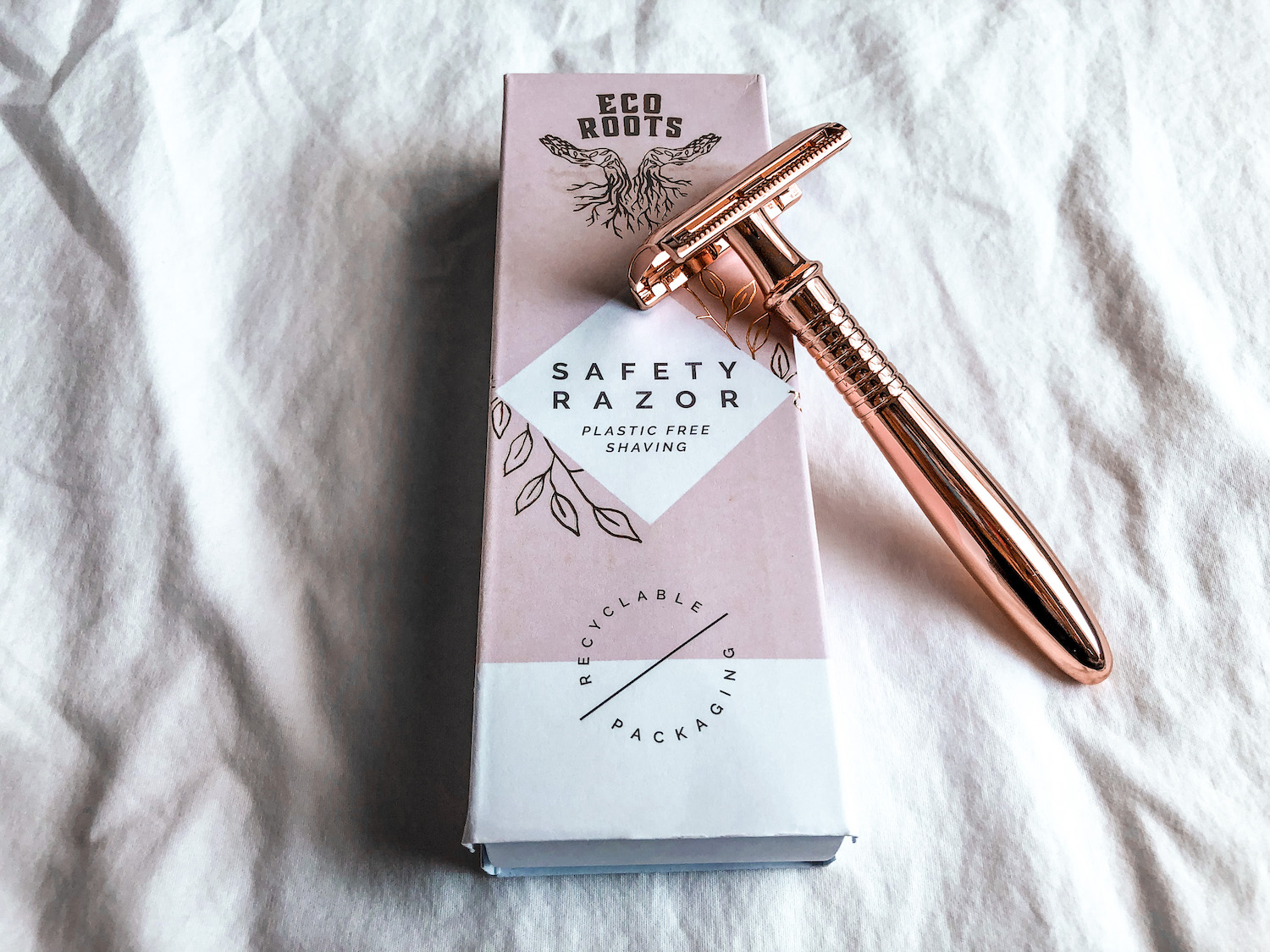 This post may contain affiliate links, meaning I get a commission if you decide to make a purchase through my links at no cost to you. Read my disclosure for more info.

It’s been years now since I’ve been on a quest to live more sustainably, minimally, simply, what have you. I’ve sold or donated a lot of my personal stuff, made my own hair products, I drink out of a mason jar with a reusable straw. Efforts are being made. Using a safety razor has never really crossed my mind though.

Not for any reason in particular. I just didn’t think I needed it. I was already using a popular shaving subscription service and getting cartridges sent to my apartment every other month at an affordable $7 per delivery. While I liked the simplicity and culture of the service, I wanted to make shaving a zero-waste experience for me. And with the pandemic putting my waxing routine on pause indefinitely, it seemed like a good time to make the switch. So, I began my hunt for safety razors.

It shouldn’t come to anyone’s surprise that as I was searching for a safety razor to test, the main ones I kept seeing were male razors or targeting a male customer. Even some of the “best safety razors for women” lists were just masculine razors under a female/women headline. Maybe safety razors are a man thing. I don’t know. All I know is that the results I was finding were awfully skewed towards those with Y chromosomes.

I was looking for something that would make shaving an experience for me. I wanted a razor that was sustainable, easy-to-use, and, most importantly to moi, feminine. And that’s how I stumbled on this safety razor from Ecoroots.

What is a safety razor?

So, you might be wondering what exactly a safety razor even is. When I first heard about safety razors and their concept, it reminded me of a fancy version of the straight razor Reek (formerly Theon, and afterward again) used to clean up Ramsay Snow in Game Of Thrones. And that’s kind of what it is.

A safety razor is basically the safer option compared to shaving with a straight razor, though back then they had to resharpen the blades before each shave, and have been in existence since the beginning of the 20th century. They were pretty much a mainstay in households until the 1970s when plastic, pollution, and overall mass destruction were becoming all the rage. Disposable razors were, and still are, so cheap that people can afford to throw the entire razor away, buy more disposable razors, and produce more waste.

A safety razor typically has a durable handle that’s reusable along with a razor head. A single razor blade goes between the handle and head; simply unscrew, place the blade, screw tightly, and you’re set. It’s really that simple.

I opted for EcoRoots’ safety razor for multiple reasons.

EcoRoots has an organic shaving soap, though I just use a moisturizing bar as I currently have a lot of those I need to use up. I found the razor to be easy to use and have hardly nicked myself with it. Only once or twice but no more than I would when switching to any other razor. I braced myself for that. Every article I’ve read on safety razors said that’s expected because the razors are sharper than those of traditional blades. No issues with me yet thankfully.

Initially, I thought I might not be applying enough pressure when I shave, but I’ve had incredibly close shaves all the times that I’ve used it so far. I’ve been able to glide over tricky spots like my shins, knees, and underarms pretty effortlessly. So, maybe safety razors are just that amazing compared to their plastic counterparts perhaps.

Why You Should Switch To A Safety Razor

It provides an incredibly close shave.

I’m always shocked at how smooth of a shave I’m able to get with my safety razor. I must’ve come to the table with preconceived notions as to how my experience would be because I wasn’t expecting it to be anything rave-worthy. And, can you blame me? After decades of “five razor blades for an extra-close shave!” marketing tactics, what on earth could one single razor do for the Nigerian hair on my legs? Apparently, a lot. My skin was smooth after that first shave. I didn’t want to stop touching my legs. I tend to struggle when I shave my underarms (I usually wax but I haven’t seen an esthetician in yonks because COVID and I’m not trying to wax myself), so I expected nicks there, but nope! And I don’t have to apply a lot of pressure to get these results, which takes some anxiety out of the process.

The replacement blades are dirt cheap.

With my popular shaving subscription service, I was getting four razor cartridges for $7, or $1.75 per cartridge, which I thought was a steal at a time. And it is if you compare it to disposable and plastic-heavy options found at the supermarkets. I remember those were $24+ just for a 4-pack. With a safety razor though, replacement blades are 10 for $3.50, or $0.35 per blade. My wallet is forever grateful for any money saved.

A lot of those razors with multiple blades promise the best shave because they’re stacked with three, four, five, or however many blades. But the truth is that those blades are made from steel of cheaper or inferior quality, and, because there are so many of them, they scrape your skin and allow hairs and gunk to get trapped between them. Safety razor blades are made of better material and sharper, providing a nice clean shave with less irritation because of its single blade. Plus, no hair or gunk buildup.

A unique and personal shave experience.

Shaving with a safety razor requires some attention. It’s a sharper razor blade, there’s only one blade, and because of the razor head, you do have to consider the angle of the razor, especially when you’re shaving under your arms. With that being said, don’t be overwhelmed with using a new tool because I promise it isn’t rocket science. Safety razors are on the heavier side and the weight alone helps apply pressure, so you don’t have to apply so much yourself. Like most things, it takes a try or two to get used to it, but I’m convinced that you’ll be a convert after your first shave.

There’s absolutely no plastic on my safety razor, which further reduces my overall carbon footprint (yay!). The handle itself is high-quality and made of stainless steel and the stainless steel replacement blades are recyclable. All you have to do is unscrew the handle from the head, remove the razor, and you’re done. One of the things that sold me on my razor is that it’s rose gold, which is one of my favorite colors up there with millennial pink (#basic). A lot of safety razors are geared towards men and I’ll assume it’s because safety razors are old and nostalgic and women weren’t exactly shaving when they first came around. Well, whatever the case may be, we shave now, and some of us want pink razors.

I’m always amazed when I’m learning about more ways to live sustainably and equally amazed when I discover that it tends to be pretty easy. This is literally the building upon habits and changing one thing at a time. Who knows how green we’ll be a few years from now. I look forward to looking back… ha!

Ready to make the switch? You can shop at EcoRoots and find the safety razor, replacement blades, organic shave soap, and more for a zero-waste shaving experience and overall lifestyle.

Already using a safety razor? Share your tips below! And let me know if I missed anything!

Pin it for later!

Why Millennials Need To Take The Coronavirus Outbreak Seriously